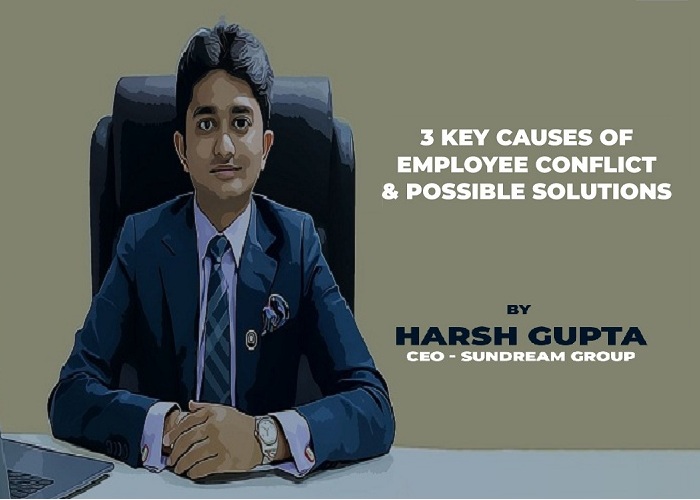 Employee Conflict 101 – Directing Discord and Disunity Towards Agreement and Alliance

“If he will keep repeating this, I am not going to have anything to do with him”.

“Those two are always involved in arguments and discontent. They are causing stress and low morale to the whole department.”

“That department is always at odds with other divisions; they can never be team players.”

Sound familiar? Is conflict like this a daily occurrence with your organization? Let us explore the three major reasons of conflict, and how you can act as the medium to channelize that contentious energy into an active teamwork.

Cause #1: Lack of Direction, Lack of Purpose

This is very common in business, whether it’s found at the top of the organization as a lack of corporate direction, or at a department level as staff not knowing how their team fits in. It results in apathy and active misdirection, both symptomatic of the root issue.

Apathy. Let’s face it, when staff don’t know where they’re going, or how what they do fit in with organizational direction, it becomes pointless to work hard. After all, the essence of “drive” implies a direction, so don’t expect employee energy if a destination isn’t clear. So, that relates to stated direction. But, it’s important to understand the more insidious problem of failing to clarify a group’s role in helping the organization move toward a given target. This issue is most common in larger organizations, but can be found in smaller ones when the leadership gets out of touch. The conflict produced here isn’t overt, but it’s constant nature lowers morale into the pits.

Active Misdirection. There are always staff who are pushed to get things done, and if the direction isn’t there, they WILL find something to complete whether it’s compatible with other departments or not. This is especially troublesome in those types of organizations with specialized departments, such as hospitals. When a department’s function requires people with specialized training, it’s very easy for that group to become short-sighted and see their own work as an end in itself. Add leaders who don’t work to make the department’s part of the bigger picture clear, and you’ve got real trouble. The conflict arises in dealing with other departments, who see the unit’s ingrown focus as a lack of teamwork and selfishness.

What Can You Do? A good leader must first work to understand the organization’s direction. If you’re not in executive management, that may require tactful discussion with executives to get clear on what the direction really is. But you need to be clear on it. Once that’s accomplished, block out an hour to work through your group’s part in moving the company toward its goal. It’s always a good idea for you to be clear on this before you get with the team to discuss it. They will have questions, procedural issues, and plain old-fashioned grumps like “How are we supposed to do THAT…?”, and you will be better prepared to answer them if your own mind is lucid. Finally, find relevant measures to report on performance, both to your own boss and to the staff in your department. This is a critical part often overlooked, but it serves to demonstrate to the working staff that they are accomplishing something worthwhile.

Cause #2: Lack of Organization

Disorganization is frequently viewed as just a fact of life, but its effect on inter-personal conflict (as well as on performance) is devastating. Look at some of the commonly heard comments within a disorganized department…

2. Why is this information always missing?

3. The chart is gone AGAIN!

Are those comments indicative of conflict? The most common outcome of lack of organization is frustration, and the anger that stems from that frustration. Lazy staff will just go along with it as inevitable, and grump about it around the water cooler. Conscientious employees will worry and fret over the extra work they have to do to “get it right”. And they will work to get it right – up until the time they quit. You will find turnover heavily affected by disorganization in a unit. Whatever the habits of your workers, you will find that confusion within a department will produce sullenness, gossip, and low morale.

What Can You Do? Time spent analysing the department processes and needs, and then developing a plan to correct issues, will pay off large dividends here. If you don’t believe that, look at the “new ideas” that are a part of Lean: The Five S’s. They are nothing more than old fashioned organization of the workspace to be productive. Once a work area is organized, and steps are taken to smooth the flow of work through the process, you’ve provided a means to have people take pride in their work. People who take pride have high morale, and people with high morale have fewer complaints and are much easier to manage.

Cause #3: Lack of Accountability

Welcome to the 21st Century, where accountability is considered out of date and even intolerant! Because that thinking is now common in our society, you will – as a leader – have to creatively demonstrate its importance. Perhaps the first thing necessary is for you to be convinced of its value yourself.

What Is Accountability? A good question to start with, but the meaning is “to hold responsible or answerable for actions”. It’s based on the principle of responsibility, and in mature people it begins with a willingness to take personal responsibility for one’s actions. When applied to a department or work unit, it means that the whole group is held accountable for its actions or outcomes. Now that accountability usually takes the form of financial indicators because they’re easy to measure. But the lack of accountability in other areas is the starting point for conflict among staff. The conflict can take many forms: anger at other staff for not pulling their share of the load, dissatisfaction with leadership for playing favourites, or resentment when unrealistic expectations are foisted upon work groups (yes, leadership has to be accountable for its own actions!).

What Can You Do? To be effective in reducing conflict arising from lack of accountability, leaders have to first understand that dialogue with the working staff is necessary. Why? Because developing agreement on what rules will be followed will generate self-policing among staff, and result in much less work for the manager or leader. Sure, you will still have to have requirements placed on the group by business imperatives, but that staff agreement on accountability will make a big difference. Once you’ve done that, you have one more job: enforce those rules fairly and every single time it’s necessary. You will find that conflict will diminish and morale will immediately go up.

Conflict within a group – or even between two people – is inevitable. But understanding its causes and working to reduce those sources is the job of a leader, and one that will make his or her work life much more enjoyable.