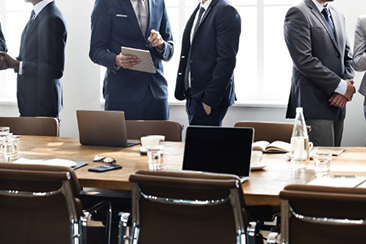 Time to Put A Few Business Networking Myths to Rest

Networking is about finding a new job or client, or making a sale – That’s hopefully the end result, but it’s not really the purposeof networking. It’s about establishing, building and maintaining professional relationships. And it’s as much about what we can offer to those in our network, as it is about what we can get. In order for networking to be successful, it must be a reciprocal relationship.

Networking occurs only at business networking events – Traditionally, networking has occurred only at face-to-face networking events, and that continues to be the most popular way to network. But networking can also occur in less obvious places: volunteering activities, the supermarket, the gym, parties, taking a walk in the neighborhood, even while on vacation. I’m not suggesting that you actively network at these other venues, but to at least have your business cards available to offer since these are all places that have the potential to meet and converse with new people. And don’t forget about virtual networking on sites like LinkedIn, Facebook, YouTube, Twitter, etc.

Talk as much as you can when you’re networking – Sure, you want to let others know of your strengths, experience and expertise. It’s important, however, to balance speaking with listening. Active listening is more than just waiting for our turn to speak. It’s about hearing what the other person is saying in order to understand who they are, what they do, and how you can help them.

Networking is only for extroverts – Although networking can present certain challenges to introverts, there are effective strategies that introverts can use in order to get the most out of networking. Bringing a friend to an event, but agreeing to separate is one good approach. Also, pace yourself, don’t schedule too many events back-to-back and take time to “recharge your batteries.” Finally, introverts should consider alternative ways to network – for example, virtual networking and the less conventional venues mentioned previously. Engaging in these, in conjunction with the more traditional in-person networking events can be an ideal strategy.

Weed out those who you think would not be a good contact – Even if someone appears not to be a good contact that may not actually be the case. Keep an open mind and consider the possibility that someone in their network, or even someone in their network’s network may end up being a worthwhile connection. It’s always a good idea to think 2 or 3 degrees out and to see the big picture.

Once you make new contacts, your job is done – Establishing new relationships is only part of the story. The real key to creating successful networks is to then cultivate those relationships by not only keeping in touch with them on a regular basis, but also offering something to them in the way of resources, expert advice, or an introduction to someone else in your network, for example. If you keep consistent contact and build those relationships, people will be much more receptive to helping you.

One final note: To make the most out of networking, keep in mind that it’s really about relationship-building, Networking is truly a career-long process that should be incorporated into our daily lives on some level, not only when we’re looking for that new job, new client or new sale.