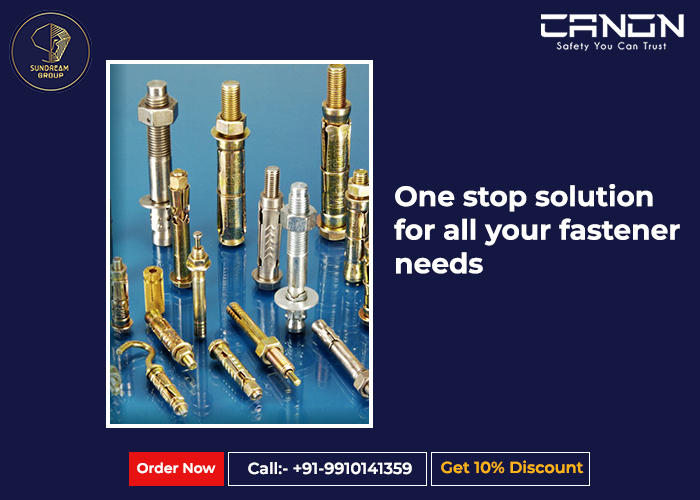 The Nuts and Bolts of Fasteners

Bolt is a metal, in the shape that resembles a cylinder, which fasten objects together. It is a piece of steel or any other material at one end forged to make square, round or hexagonal head and the stem which is partially or fully threaded at the other end. Nut, on the other hand, can be either square or a hexagon, having a hole for passing a thread, at the centre. Bolts can be plated with zinc or cadmium to resist corrosion. A bolt comprises of a head which is ensuring a practice, i.e., a hexagon in shape and its head could be designed in such a way that it could have heads like square or counter neck.

When it is commonly used with a nut, a bolt is found to form a commonest and fastest way of having two or more parts joined temporarily or permanently. The nut in contrast forms a part of the screwed pair. It comprises of an internal thread and as it acts like a fastening in machine construction. The nut then moves axially as it is rotated. Just as the bolts, there are different types of nuts. These are included of various features like the knurled, wing, slotted, hexagonal, and square.

Bolts are used extensively in all industries either generating or maintenance of engineering products. They are universal industrial fasteners and their demand is expected to increase with the development of the manufacturing, maintenance and construction sector.

Market demand for the Bolt Manufacturers

With the present pace of industrial development, there is a rising demand for Nuts and Bolts in the furniture making outfits, metal fabrication, motor vehicle and other automotive industrial sub-sectors, etc. Although Nuts and Bolts are manufactured by whole lot of the existing metal industries, the bulk of the demand (both qualitatively and quantitatively) still remains unmet.

The bolt process fabrication would be begun by using mechanical scraper, removing the rust formation. Then the pickling tanks is used to pickle wire coil. The mild rods of steel are suckled in the header machine. Trimming machine is used to achieve the head and stem reduction. The blanks are loaded for threading to the automatic thread rolling machine. The bolts are set inside a barrel and refined. If it is required, they are also plated for corrosion. Nuts are manufactured alike bolts. Prickling and removal of rust will take place. Then drilling and cutting of blanks is performed. The blanks are put on the tapping machine, threading is done, followed by polishing. Finally, after inspection, it will be first put to a weighing machine and then packed in accordance. When all this is done, the nuts and bolts are manufactured.

Utility, Purpose and Types of Bolts

Square head bolts are a type of bolt that have a square shaped external wrenching head, thus giving the name square head bolt. These are typically made from carbon steel and because of the square shaped head they provide a large bearing area for positive gripping. The square head makes them easy to tighten in blind areas perfect for tight areas. While head bolts also known as t head bolts are used in many applications for instance- they are used largely in the new buildings for aesthetics and in the railroad industry.

U bolts not as commonly used as other bolts get their name from their shape, they are a bolt shaped in the form of the letter “U” with screw threads on either end. Primarily speaking u bolts are used to support pipework in buildings for pipes typically carrying carious gases and fluids. Because of their application U bolts are typically described by what type of pipe it will be used to support. This would be a description that would include the pipes thread length, thread size, inside height and diameter.

Rock Bolts are among the toughest types of bolts as they are generally used to connect heavy pieces of lumber and various other material that carry an intense load. Rock bolts also known as lag bolts or lag screws come in many sizes with diameters from ¼” to 1 ¼ ” and lengths up to 6″ or more. Rock bolts typically have an external hex head and require a nut to help support the heavy weight they are intended to support.

Square head bolts, carriage bolts, U bolts and rock bolts are types that we are commonly asked about and what they actually are. Hopefully this provides a good explanation to those looking to better understand the use, design, and intentions for each of these types of bolts.